The killing of Abu Bakr Al-Baghdadi last year put the jihadist nexus in North-Western Syria back in the spotlight. The faltering of Idlib’s de-escalation zone is currently increasing the risk of a direct military confrontation between Turkish-controlled forces and the Syrian and Russian militaries, reigniting the geopolitical component of the conflict. 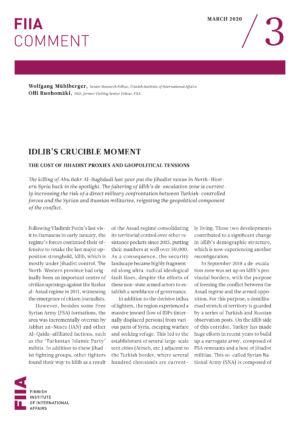 In this FIIA* Comment, Idlib’s crucible moment, a mapping of actors and interests around the current military escalation in Idlib is complemented by two possible scenarios.

It will be of interest for all those working on the war in Syria, be it from the angle of conflict analysis/resolution, jihadism or foreign policy/geopolitics. The Comment was written by Senior Research FellowWolfgang Mühlberger together with Olli Ruohomäki, former senior visiting fellow at FIIA.

*FIIA — The Finnish Institute of International Affairs is a research institute whose mission is to produce high quality, topical information on international relations and the EU. The Institute realizes its aims by conducting research as well as by organizing domestic and international seminars and publishing reports on its research and current international issues. The Institute also publishes a journal, Ulkopolitiikka (Finnish Journal of Foreign Affairs), and maintains a specialized library.